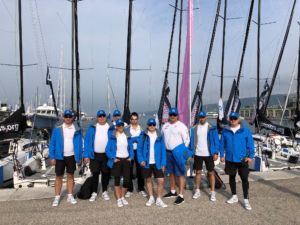 JV PPC was represented by two teams one of which took the first prize in L30 and the other one ranked fourth with the teams ranked 88 and 189 in the general rating including all classes of boats. 2,067  boats were registered and 1,070 of them crossed the finishing line.

“To become the first in the L30 boat class in such a large-scale event is the result of teamwork. And in this respect, sport is like a business. The PPC team was represented by different departments ranging from production to administrative staff. There is no way to cover the distance without efficient and well-coordinated actions in the yachting sport. I am pleased that the PPC team achieves success both in sports and production performance”, – commented Viсtor Gladun, PPC General Director.

The PPC representatives participated in the sailing regatta for the first time. Their participation in the event was award to the Company’s employees for their efficient performance and high achievements.

Also, the team was proud to include such true professionals the Company invited to join the event as honorary members: as Rodion Luka, President of Sailing Federation of Ukraine, the world and Europe champion, he was  the skipper in one team, and Andrii Husenko,  the other team leader, a member of the national team and ten times champion of Ukraine. “The PPC team members were very enthusiastic despite it was the regatta debut for many of them. Everybody worked hard. I have not seen such well-coordinated teamwork for a long time. It is true to say that a professional act professionally in all aspects ever”, – said Rodion Luka.

Another source of pride was the fact that the L30 boats the PPC teams were sailing were manufactured in Dnipro, Ukraine. PPC always gives preference to the national manufacturers whose priority is quality and qualification.

The Barcolana is an international sailing regatta taking place in the Gulf of Trieste annually since 1969. Both professionals and amateurs start on the same starting line side by side on boats of different sizes categorized according to the overall length of boats. Every year, about 25,000 people and over 2,000 boats participate in the sailing race in Italy.