Kyiv, 17 May. – Artem Postavmyi, PPC’s representative, delivered a speech to CONGRESS ULPGA 2019, an annual ULPGA (the Ukrainian LPG Association) conference held in Kyiv on 16 and 17 May. 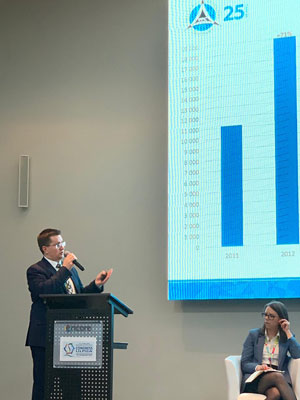 The Conference is focused on discussing LPG market’s questions of the day including such aspects as the market future development, taxation policy, diversity of supply, tools required to ensure the growth of internal production, logistics and storage, and automation.

Within the framework of the Conference first day sessions, Artem Postavnyi, PPC’s manager of LPG sales, had the floor at one of the discussion panels. The Company’s representative spoke about PPC’s background, experience and achievements in the sphere of LPG production. He emphasized that the Company build its LPG plant as early as 2011 and it was the first among local private companies to implement such a project in Ukraine.

When analyzing the LPG production dynamics, Mr. Postavnyi mentioned that the trend has been changing from decline to growth since 2017. Incremental production of hydrocarbons and additional loading of the plant with the third parties’ raw material has contributed to the production growth.

The Company anticipates further growth in LPG production in 2019.

“Poltava Petroleum Company has been seeing into opportunities to increase both hydrocarbon production and LPG production. Over the past year, our team realized the strategy of further increase in additional loading of the LPG plant capacity from 25% to 40%. Since this type of fuel keeps demonstrating the tendency for consumption growth, we will continue to develop this direction of the Company activities. We believe it has upside potential,” commented Artem Postavnyi.

To accomplish the stated objective, the Company plans to increase its natural gas production in 2019 and further cooperate with raw material suppliers. Also, we would like to remind that in September 2018, JKX Oil & Gas plc, PPC’s parent company, approved the PPC development plan for five years.

***
JV Poltava Petroleum Company, a joint Ukrainian-British venture, was founded in 1994. JV PPC is a leader among non-state oil and gas producers in Ukraine. The Company’s scope of activities: prospecting and exploration for oil and gas, and hydrocarbon production and processing. By applying advanced technologies and techniques, Poltava Petroleum Company makes its contribution to Ukraine’s energy independence.