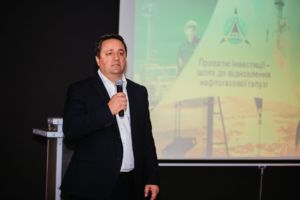 Odesa, 20 September 2018 – Today, representatives of the Poltava Petroleum Company (PPC) took part in the Odesa Offshore Conference. PPC’s General Director Viktor Gladun spoke during the first panel, dedicating his presentation to cooperation between private and state companies. He also analyzed the state of gas production in Ukraine in comparison with international practices and shared PPC’s vision for further development of the industry.

Mr. Gladun noted significant progress in Ukraine’s gas production over the past two years. In particular, according to Investment Capital Ukraine (ICU), in 2015-2017 private production increased by 6% compared to the 2% growth in the public sector. Although the share of private companies in total gas production is still relatively small – only 20% in 2017 – with facilitation of successful cooperation between private companies and the state, the share could reach 25-30% in 2020, while private production could increase by 45-70% to 6.3-7 bcm per year.

Mr. Gladun also emphasized the unique gas resource existing in Ukraine: old wells abandoned or liquidated back in the Soviet era. Modern technologies make it possible to restore such wells and resume extraction. This is a good example of a low-margin project, which requires the involvement of small and medium-sized private companies. For instance, PPC has several dozens of such wells on its licensed sites. And PPC’s abandoned well recovery program already accounts for 29.4% of annual production.

“Cooperation with private gas production and service companies for joint development of difficult fields as well as small projects will ensure the success of Ukraine’s gas production. Such cooperation can increase gas production volumes not only for individual companies but also for the country as a whole,” commented PPC’s General Director Viktor Gladun.

PPC sees future success in radical changes in the approach to regulating the oil and gas industry in Ukraine, namely in the creation of stable legislation, as stability, predictability and careful calculation of risks are vital for investment planning. Another priority is launching the process of issuing new licenses and auctions for new licenses. In addition, it is important to digitalize, update and open geological information for potential deposits, which is a key factor when making an investment decision.