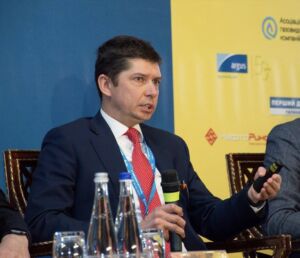 CFO of JKX and JV PPC Dmitry Piddubnyy took part in the discussion of Panel II – Prospects for oil and gas production in Ukraine and the Black Sea region.

The CFO named the key steps to increase gas production in Ukraine:

“The positive dynamics of PPC production indicators since 2018 is a vivid example of the effectiveness of incentive taxation.
We expect a state approach in supporting the private gas production sector: compliance with the guarantees provided and ensuring transparent rules of the game in the market, “Dmitry Piddubnyy stressed.

The production of JV PPC for 9 months is 147.9 million m3 of natural gas and 37.4 thousand tons of oil and condensate. The company paid UAH 415.6 million in rent to the state budget of Ukraine.

JV Poltava Petroleum Company is a Ukrainian-British joint venture established in 1994 and is a subsidiary of JKX Oil & Gas plc. JV PPC is one of the leaders among the non-state oil and gas companies in Ukraine. The company’s field of activity is the search, exploration, production and treatment of gas and oil. Poltava Petroleum Company uses the most modern technologies and methods to achieve energy independence for Ukraine.
The parent company, JKX Oil & Gas plc, is a publicly traded company listed on the London Stock Exchange since 1995 and is governed by a Board of Directors. The CEO of JV PPC and JKX Oil & Gas plc is Viktor Gladun, who has been heading the company since 2016.