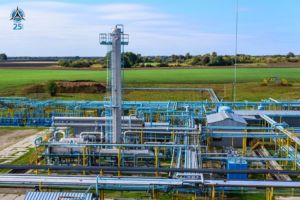 PPC increased its gas production by 56.9%

The Company has produced 131.1 MM m3 of natural gas and 20.5 thousand t of oil and condensate. The first two quarters have witnessed the completion of two new drills: well 3 in West Mashivske and oil well 81 in Novomykolaivske.

The incremental production has been achieved due to the successful workovers and enhancement jobs, in particular in wells 101, 126 and 138 in the Ignativske field and well 16 in the Novomylolaivske field. Well 103 Ignativske shows steady production at 210 M m3 per day. Over the reporting period, ten projects have been completed both in PPC’s wells and in those owned by state-run companies. In particular, two wells were from JSC UkrGasVydobuvannya (UGV) stock of abandoned and suspended wells and one was from NJSC Nadra Ukrayny’s stock.

“Poltava Petroleum Company continued increasing its production in Q2 2019. The H1 hydrocarbon production has exceeded the H1 2018 figures by 56.9%. This upside trend has been achieved as a result of drilling new drills and implementing the workover and stimulation programme. Undoubtedly, it has become possible due to well-coordinated joint efforts by the entire team and, first of all, by Geology and Technical Departments. We proceed with the approved work programme, and, at the time being, we are at the final stage of drilling well 142 Ignativske. Our goal is to enhance production, as sustainably and efficiently as possible, to the benefit of the Company and all the shareholders”, said Viktor Gladun, JV PPC General Director.

For the five months in 2019, PPC’s production taxes for natural gas, oil and condensate amounted to UAH 272 million, with UAH 13.6 million of this amount directed to local budgets in Poltava Oblast including the communities of Nekhvoroshcha, Drabynivka, Tereshky and Bazylivshchyna.